The Emperor Gets New Clothes 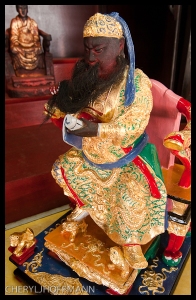 Yes, the title of this post is a reference to the children’s story about the vain emperor who wandered through the streets naked because he believed he was wearing the most beautiful clothes ever made.  I couldn’t help think of it, when someone explained to me that the statues in the Nine Emperor Gods Temple in Ampang were getting a “face lift” and a new set of clothes.  In fact, it’s much like that story but without the naked part – and the deities in the temple now really have a fresh, beautiful appearance in honor of the 2010 festival and the renovations at the Nine Emperor Gods Temple.  Their new “apparel” has been created for them by a master craftsman, not a seamstress.

Mr Loo, the man whose job it is to refurbish the statues, learned his art from this father. Although some of the tools and materials have changed slightly, the process of refurbishing a wooden Chinese temple statue remains what it has been for centuries.  Loo is a quiet, thoughtful person who spends his days respectfully handling objects that are of great spiritual value to the temple and the community.

Loo sands off the old finish of the statues, then, after brushing on an undercoat to protect the wood, he applies a complex texture of lines to simulate the embroidery on brocade.

Although the strings of pliable goo that are used to create the design were once made of a special Chinese glue and face powder, Loo now uses commercial epoxy putty which he rolls into fine strings and applies to the surface of the statue.

When the gold leaf is smoothed over this pattern, it takes on a the appearance of a rich brocade fabric and voila! the Emperor has new clothes!

Then, Loo adds some painted accents, new hair, hats and implements and the deities are ready to be paraded around town!

At first Loo was asked to refurbish only the three main deities in the temple,  but when they saw the high quality of his work and the finished product, the temple committee asked him to apply his artistic touch to the smaller statues as well.

I first went to see Loo at the temple in early August and he is still working there now, every day, to get the work done before the statues are moved back to the renovated main temple on October 3rd.  It’s a big job to be the tailor for a whole temple of Emperors, and Gods and Goddesses!

One response to “The Emperor Gets New Clothes”