On October 3, 2010, the Nine Emperor Gods Temple in Ampang will raise the 50 ft pole that will guide the spirits of the heavens to the temple for the Nine Emperor Gods Festival.  This is the official start of the festival.  The pole, known locally as Kor Ting, is erected in a small sanctuary on the right side (stage left) of the main temple.   At the top of the pole is a branch of bamboo and strung from that is a lantern, with nine lamps, and a banner that proclaims the name of the temple festival.  If you care to understand the Festival of the Nine Emperor Gods, visiting this altar is a good place to start.  I have heard this pole described as an airport – the passage way for all of those from heaven to come to the festival.

The lanterns have constant attention from temple volunteers.  Each hour for the nine days of the festival, the lamps are brought down, refreshed with new oil and hoisted upwards again, a constant beacon. 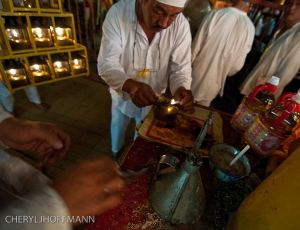 All of the lamps must stay lit at all times

Most visitors to the temple during the festival will pray in front of the lamp as a way of asking for the protection of the heavens.  I suspect that it is also a way of honoring ancestors.  At the base of the pole is a fire pit that figures prominently in some of the communal ceremonies as a place to burn paper money. 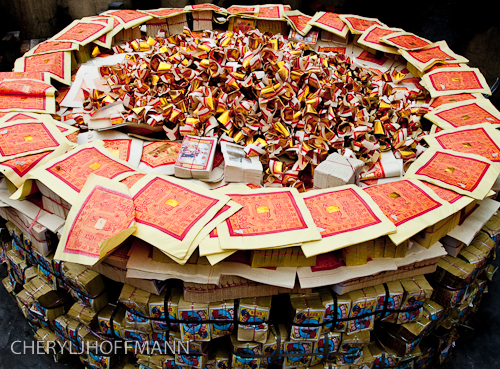 The mythology of the Nine Emperor Gods places them in the heavens.  According to some sources, the emperors are represented by the 7 stars of the Big Dipper and two stars more difficult to see.  Wikipedia goes so far as to say that the stars of the Big Dipper form a yin/yang symbol.  One devotee told me that the pole represents the access point for the soldiers of the emperors who reside in the heavens and come down to protect the festival and all those who prayer there.  There are major prayers performed by devotees on day 3,6 and 9 of the festival, in which food is cooked and offered ceremoniously to the army of the emperor.