It Begs the Question

The Nine Emperor Gods Festival in Ampang is a cacophony of visual stimuli.  That’s why I enjoy it so much – the combination of the sacred and profane, the commercial and the spiritual, the dark and the light, and, I suppose, the yin and the yang.  There is so much to think about.

And that brings me to one element of the festival that must not be ignored – the beggars.  We all understand that beggars are by no means exclusive to the Nine Emperor Gods Festival.  And we know that they are most attracted to religious occasions when their customers can gain “merit” by giving them cash.

Last year I was impressed with the number of beggars that lined every pathway at the festival.    This year, the beggars were in place before the stalls for the vendors were even erected. 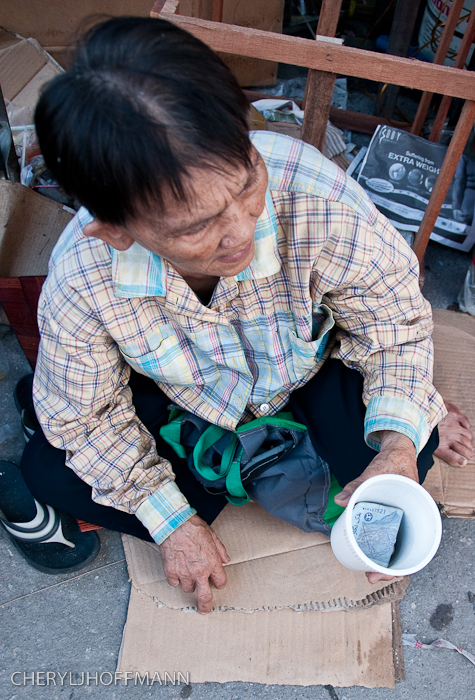 I noticed that the early arrivals were the ones with serious physical disabilities.  The others, the women with babies and the orphaned children didn’t arrive until Day 1, today. 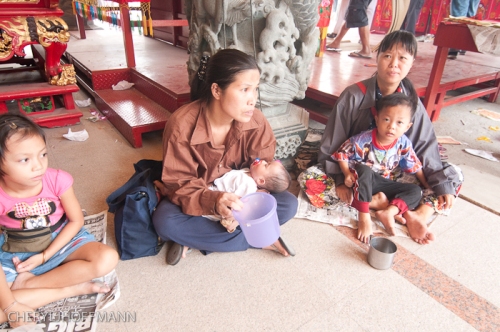 In their pleading, there is an alertness to our need to donate at a time of devotion.  For recognizing that and providing us with an opportunity for charity, I give them kudos (and all my small bills and coins!)

Here is a moment that speaks of the need and the generosity that surrounds this aspect of the festival. 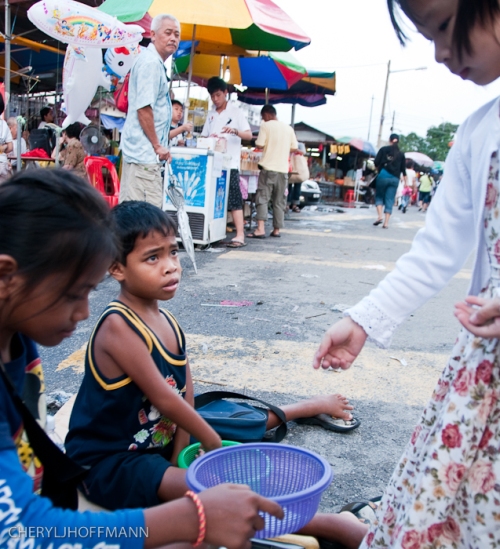 The needy are acknowledged and their presence is accepted graciously.

I sense a level of syndication in the presence of the beggars at the festival and it isn’t just because I watched Slumdog Millionaire.  Last year, there were numerous disadvantaged “foreigners” at the other end of the extended cups.  Please don’t get me wrong.  I’m not saying that they aren’t needy and my heart goes out to them in the difficult circumstances they are in.  I’m raising this because it makes me think about the ways that the underprivileged are victimized and that their plight is even more distressing than at first glance.  I suspect that many of the beggars are brought to the site by facilitators who monitor their business and don’t leave too much money in the pockets of those to whom we give it. I spent one evening at last year’s festival observing.  It reminded me of “Oliver” without the musical accompaniment and the fairy tale ending.  A couple of times I tried to help in a way other than throwing coins in a cup and my attempts were met with disdain.  Silly me, I thought a child might like a drink – but her mother brushed it away nervously and asked for money.  It appeared that she was being watched and that makes it all the more disturbing.

One last photo that does beg the question – What is really going on here?

2 responses to “It Begs the Question”